2020 was a disastrous year on many fronts. It was certainly terrible for UK dividends. The lock-down prompted firms to batten down the hatches and dividends were cut across the board. In aggregate the amount of dividend paid by UK corporates fell by 43%. There were very few hiding places. Lots of companies cut because they had to, but many others cut just in case, because everyone else was and sometimes because regulators told them to. The total dividend paid by the Slater Income Fund was down 36%. Better than the market’s aggregate cut but still undeniably horrible.

As the economy has unlocked the dividend taps have been turned back on. According to data from Link, the aggregate income for the UK market in the first 9 months of 2021 is up 27% compared to 2020. There is more nuance to the restoration process than there was on the way down. Some reductions have turned out to be permanent, such as at the Big Oil firms, whilst more robust businesses are back to the old payouts and in some cases, have even grown the distribution.  The dividends paid by the Slater Income Fund over the first 9 months of 2021 are up 49% compared to the same period in 2020, which shows a more vigorous recovery than the market average. The greater income resilience of the Fund’s holdings is now shining through.

The Snake was bigger than the Ladder

Despite the market average 27% improvement in aggregate income year-to-date compared to 2020, this still leaves the payment 28% lower when compared to the first 9 months of 2019, ie: compared to life pre-Covid. Again, the Slater Income Fund has shown its worth, with the first three quarters of 2021 actually being a tiny bit ahead of those in 2019.

An interesting point from an income angle is that dividends are recovering more slowly than earnings. Forecast profits across the market are, perhaps surprisingly, not far off their 2019 pre-Covid levels, whilst, as we have seen, dividends (in aggregate) are still meaningfully down. This is perhaps good news because it means dividend cover is being restored. In the second half of the last decade dividend cover in the UK was quite skinny at around 1.5x to 1.75x. It is now approaching a much healthier 2x. 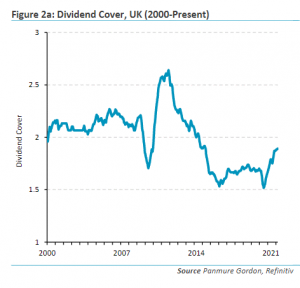 Sadly, one area where the character of the UK market’s income has not improved ‘after the storm’ is that it remains very concentrated. Panmure Gordon estimate that 47% of UK dividends are paid by just 10 companies, not dis-similar to the situation pre-Covid. There are two negative consequences from this. Firstly, concentration brings risk. A second consequence is that many UK Income Funds can look a bit samey because the hunt for yield corrals them into the same names. By contrast, the income profile of the Slater Income Fund is much smoother. The 10 dividend big dogs only make up 13% of the Slater Income Fund’s holdings.

Important: Slater Investments Limited does not offer investment advice or make any recommendations regarding the suitability of its products. No information contained within this article should be construed as advice. Should you feel you need advice, please contact a financial adviser. Past performance is not necessarily a guide to future performance. The value of investments and the income from them may fall as well as rise and be affected by changes in exchange rates, and you may not get back the amount of your original investment.